Thundering with newly fueled power from the shadows and dust of humanity's crumbling existence, KATAKLYSM return triumphant with their 14th full length studio album: UNCONQUERED. For almost 3 decades, the French-Canadian melodic death metal syndicate has delivered unapologetic waves of powerful sound across the entire globe. As of late, that globe has suffered tremendously, forcing the inspiration of many artists to extinguish, but for KATAKLYSM, the pressure caused a creative spring to burst forth with furious energy. “With everything that’s going on in the world, we couldn’t have chosen a better title,” explains vocalist Maurizio Iacono. “This album is a rebirth of aggression for KATAKLYSM. No one planned this to happen the way it did, but the name of this album makes total sense right now. It’s an aggressive album, yes, but a positive aggression.” Themes of fighting back and overcoming the insurmountable seethe through the lyrics and melodies of UNCONQUERED; consistent, sonic reminders of the battles that lead to triumph.

Songs like the hostile first single “The Killshot” give definition to the steadfast existence of KATAKLYSM as a whole. “To me, the music delivers the band’s exact meaning. The force behind everything; that driving force of never giving up. We have been here so long now, and these songs represent that very well,” describes guitarist JF Dagenais. Taking this album by the horns, the band had a desire to modernize what they were doing, and to be brutally honest, more so than ever before. “There were some things that I wanted to do a little different, lyrically,” explains Iacono. “The last few years I’ve been struggling with anxiety, and a lot of things related to my environment; things that I see as unjust, unfolding around me. I took a lot of that and put it into this record. It’s a very honest, and forward thinking addition to our catalogue. I think ‘The Killshot’ is the one that’s KATAKLYSM saying ‘fuck you’ to those things.”

The second single “Cut Me Down” is exponentially haunting and melodic. “It cuts your veins a little bit,” describes Iacono. The song also includes guest vocals from Tuomas Saukkonen of the Finnish metal band Wolfheart. His powerful vocals accompany the track perfectly. “I felt he was the right guy for that part, otherwise, we didn’t need more guests, he just fit. We’ve really covered all the bases from the aggression of the music, to the melodic aspect, to the technicality, but the structures that JF and I put together on this album are what really nailed it.” Long nights, whether in person or from a distance, were spent writing and composing this album. KATAKLYSM fans will hear obvious moments that reflect back to the times of Shadows & Dust and Serenity In Fire; Straight forward, no mistakes, no compromises.

“It’s so aggressive yet at the same time, easy to listen to,” describes Dagenais. These two elements combined create a murderous, power fueled combo, a deepness and dramatic overtone that is also incredibly uplifting. It is clear that every member of the band gave 200%, pushing themselves far beyond the normal realm of creativity to bring this album into existence. To assist in enhancing the depth of this sound, Dagenais decided to finally employ for the first time a 7 string guitar, something he’d been craving for quite some time. Like an elephant barreling through a tiny room, the 7 string brings extra punch and weight to the record, enhancing the richness and making it seem as if there are even more guitars playing.

When it came time to record the album, Dagenais dove in furiously with an ingrained desire for perfection. “From the ground up, the first demos to the final thing, I didn’t want to have any regrets with this. I wanted to make sure there was nothing left behind, unfinished, no mistakes.” In addition to Dagenais’s clinical approach to the recording, KATAKLYSM hired on the legendary Colin Richardson, post retirement, to aid in the production of UNCONQUERED’s weightier sound. “We got lucky because he accepted to come back and do this album; the first death metal record he’s done since he retired,” recalls Iacono. With Chris Clancy’s technicality and precision assisting him, the end result of the sound of UNCONQUERED can not be understated.

This resurgence of old school temperament and musical fury required a clean, and powerful piece of artwork to represent its arrival. The infamous heart beast, which also appeared on In The Arms Of Devastation (2006), Prevail (2008), and Heaven’s Venom (2010), makes its return with a cover image created by artist Blake Armstrong. This frightening and dominant being sears across a white universe, screaming in both triumph and agony. “The beast kind of started re-emerging by itself, a lot of people have been asking about it lately and wondering about it’s origins, etc. It’s been almost 15 years since it emerged the first time, we didn’t want to repeat the same thing with every record, but we felt like now could be a great time to bring it back, unite the old fans with the new,” continues Iacono. “Another cool thing about the artwork; Blake made it realistic. It’s not just a standard photoshop image, it’s made in such a way that it looks three dimensional; real. We really wanted to bring back the beast in a ‘reality’ setting.”

Needless to say, creating UNCONQUERED was an intense, and emotional experience for the band, and will likely make fans feel similarly. “There’s a lot of deepness on this one, a lot of honesty,” describes Iacono. “This is a very personal record for me on the lyrical side of things, in terms of the recent events in my life. Usually, I talk about broader subjects that everyone can relate to, but on this one, it’s much more personal. This is why we wanted to steer towards the UNCONQUERED, the beast is back; if you’ve followed KATAKLYSM all your life, there’s not one song you can’t attach to the catalogue; you have all those things on this record, but you also have the modernization of sound, the modernization of work ethic.”

Not many bands have achieved what KATAKLYSM has in the span of their long and rigorous career, but what truly makes them stand them apart from the masses is seeing the world through truthful eyes, and creating the perfect musical landscape to describe it. With this new album,  KATAKLYSMcomes swinging at life with hope, and renewed energy even amidst the world’s current, chaotic state. These things combined with KATAKLYSM’s relentless and organic ability to create, are the roots of what has bestowed UNCONQUERED upon us. 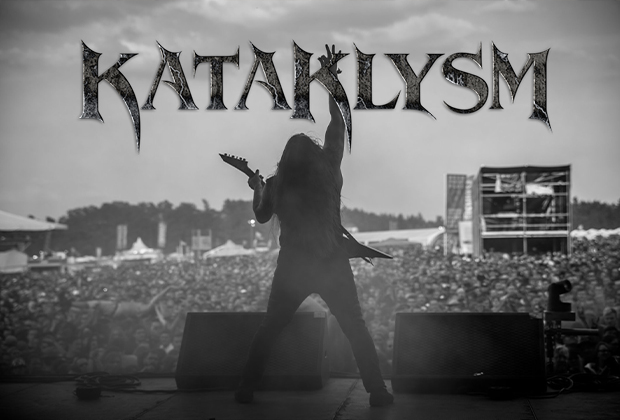